Today’s my birthday!! Happy birthday to me. 🙂

I find it oddly appropriate that I have one last modern book adaptation I want to share with you, and that it just so happens to be one about a boy (or in this case man) who doesn’t want to grow up, who doesn’t want things to change. Because here I am another year older, continuing to face change, continuing to grow older and have to do SO MANY ADULT THINGS, when I would much rather stay young. Or to say it another way, “to always be a little girl and to have fun!”

If you haven’t figured out by this point what book is, here’s a really big hint – 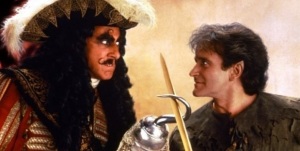 This story ALWAYS WITHOUT FAIL captured my heart and my mind as a child. I loved it with such unconditional love. I wore my copy of the book out. The covers fell off after several years, and so many pages were ripped or torn, it’s a wonder it held on as long as it did. I finally replaced it a few years ago. I was loathe to part with it, but I know I will keep reading it over the years, and there would be no way it would last. Childhood wasn’t always easy for me, and a lot of things happened that forced me to become an adult very quickly. This blog isn’t for that sort of thing – suffice it to say, the idea that one can always remain a child, especially a child at heart, has never been lost upon me. I always strive to see life from a child’s perspective, because I know how joyful they are. Everything is new to them, and that is how I hope to live my life.

Any time I hear of any sort of Peter Pan adaptation being made available to me, I will investigate. Robin Williams’ performance as Peter Pan from the movie “Hook” in the mid-90s remains a staple for me. I watch it constantly. I’ve also read the only authorized Peter Pan sequel (Peter Pan in Scarlet) which one day I hope to read again and review (since I recently added it to my shelves). The Disney version of “Peter Pan” is also a favorite (I can quote the opening lines like nobody’s business). And we won’t even TALK about how traumatized I was upon learning just what they did to the character of Peter Pan in Season 2 of Once Upon a Time. (Traumatized in a good way. Really. They did something NO ONE anticipated, and that meant in the end, I did love Peter Pan. I just loved to hate him. )

So, when I heard that there was going to be a modern adaptation of Peter Pan, called “The New Adventures of Peter + Wendy,” of course I was on board. And I loved it! (Obviously. 😉 ) Peter is a young 20-something who never wants to leave Neverland, OH, and Wendy is an advice columnist who longs to make her mark on the world somewhere out there.

They finished up the first season mid-July and were successful in raising funding to get season 2 underway. I participated in that, because how could I not?!

I won’t say too much more about it, except that if you’ve ever struggled with the whole, “Being An Adult” thing, then you really need to give this series a shot. You’ll be pleasantly surprised.

Here is the preview of the series.

And here is the first episode. (Though, there’s also a prologue you should check out too!)

One thought on “All children except one grow up.”