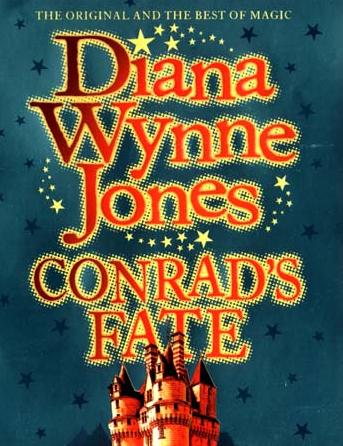 Plot in three lines or less: Conrad is sent to work at the Stallery castle, where there is something fishy going on. He is sent there on a mission (working undercover, of course) to find the person who has ruined his fate and “take care of it,” for if he doesn’t, he’ll be dead within a year. When he gets there, he finds he’s not the only one snooping around. He meets Christopher, who is also trying to find someone, and together they try and find Christopher’s friend, fix Conrad’s fate and do it all without disturbing the peace of the inhabitants at Stallery (which is not the easiest!).

New read or re-read? This was a new read for me.

Favorite Character(s): Conrad and Christopher were my favorite characters. Poor Conrad, actually thinking that he had had problems with his Fate. Christopher is a smooth-talker, and manages to become a favorite of everyone, despite causing trouble himself.

Is there anything else you would like to add? This was another in a long line of books I took out from the library by Diana Wynne Jones.